During my years at Ridley College, and during my time at the University of Western Ontario (beginning as an English major), I had the opportunity to read a wide variety of excellent novels. Particularly memorable were Wuthering Heights, To Kill A Mockingbird, Gulliver’s Travels, 1984, 2001: A Space Odyssey and Frankenstein (I had a Sci-Fi bent). As good as these books were, none of them changed me.

As I set out below the 10 Christian books which did have a profound affect upon me, I wouldn’t want to give the impression that all “Christian” books transform and all “secular” books fail to transform. I don’t subscribe to that. I love how science fiction books stretch my imagination and challenge me to think outside of the box. I have read “secular” books that have elicited powerful emotions from me. I have also read Christian books that were a complete bore, and some which were utter nonsense. But, at the end of the day, as I consider the books (outside of the Bible) which had the biggest impact on me, it was this group of 10–all of which happened to be written for the benefit of followers of Jesus. 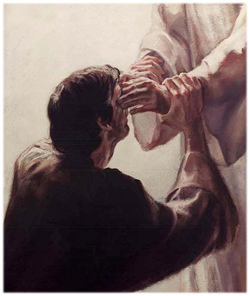 If we’re honest, we’ll likely confess that what Jesus does to the man born blind is actually quite disgusting.

John reports that Jesus mixes some dirt with His saliva and rubs it on the blind man’s eyes (John 9:6).

Sheer curiosity makes me wonder what the blind man’s initial response to this sensation was. I don’t think we should imagine the man immediately saying, “Oh, I get it, spit and dirt on my face—you’re going to heal my blindness!”

Whatever the man’s initial response was, it eventually gave way to obedience. Jesus instructs the man, “Go and wash in the Pool of Siloam” (John 9:7). The man born blind complies. John says that the man went and washed and came way seeing.

I think there is an obvious analogy to the Gospel here.

The apostle Paul explains to the Corinthians that to some people the Gospel is foolishness, and to others it is offensive.

The Gospel describes how God takes on human flesh, lives a perfect life, and yet is arrested as a criminal and is executed upon a Roman cross. The Gospel tells us that by trusting in this God-man, and in His death, we gain salvation.

To some that sounds about as plausible as healing a blind man with dirt and spit.

It is a huge deal for a man born blind to be able to see. So we’re likely not surprised to see this miracle become “the talk of the town”. And we’re probably not surprised to read that the religious leaders of the day wanted to investigate this miracle. The Pharisees ask the man how he had received his sight. I love the simplicity of the man’s reply: “He put mud on my eyes, I washed, and now I see” (John 9:15).

Again, this is an excellent analogy for how salvation comes:

The healing of a man born blind is massively significant. And yet, this healing is not the main point. This healing demonstrates the will and the power of God to heal spiritual blindness. It is fitting then that Jesus and this man meet up again in verse 35.

The man who was healed of his physical blindness now gets healing for his spiritual blindness.

At first identification, the man born blind refers to his healer as “the man they call Jesus” (John 9:11). During their second encounter, however, the man confesses “Lord, I believe” and proceeds to worship Jesus.

Permit me to draw out one final aspect from this analogy of sight. Though the man’s sight was perfectly restored, there would have been many things he would have been incapable of identifying. The man would need help comprehending what he was now seeing. He would need someone to help him to identify landmarks and the various species of animals, insects, and birds. He could see, but the work of discovery still lay ahead.

Friends, if the Lord has healed your spiritual blindness, remember that the work of spiritual discovery remains.

The answer: I was blind. I needed a cure for my spiritual blindness before I could see what the Bible was saying.

Once we place our trust in Jesus, we will be able to confess with the man born blind, “I was blind, but now I see.” (John 9:25). And with new vision, the privilege of discovery awaits.

Similarly, if we are “seeing people” in the spiritual sense, we ought to be seeking to discover the beauty of Christ that we were previously missing. And so my challenge to you is to dig into the Scriptures with a view to discovering all that God is for us in Jesus.

Let’s engage in that relationship. Let’s go to Jesus. Let’s worship Him.

The hardness of God is kinder than the softness of men, and His compulsion is our liberation. — C.S. Lewis