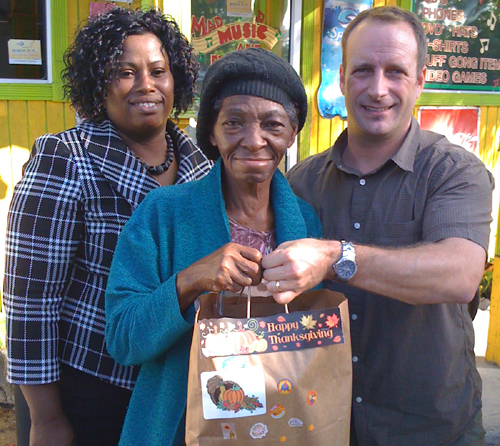 Now that I have your attention, I should really finish this sentence…

Stop giving to charity as an individual follower of Jesus.

What I’m suggesting may seem a bit radical to some, but in the context of history, what I’m proposing is actually quite ordinary.

I’ve written this post in my mind a hundred times, and I’ve harboured this conviction for many years, but it wasn’t until I engaged in 2011 budget planning for my new congregation that this conviction was lured to the surface.

What is true of St. Andrew’s Kirk has been true of every congregation I’ve ever been formally connected to. Only a very small percentage of our revenue is dispersed for benevolent purposes. The message this sends to the world is this: We care only about ourselves.

That’s the message conveyed by the bare numbers of a church budget, but it is not an accurate message. My experience, in every congregation that I’ve served, is that individual Christians are very generous toward benevolent organizations. The trouble is, as a group (as a church) we are not conveying this generous spirit to our local community because we’re not giving as a group—we’re giving as individuals.

Now imagine there are 100 Christians in a local congregation giving, as individuals, an average of $200 each to the same charity. Again, if it’s a big organization there is no way for the charity to know what is behind the motivation of the giver. What if, instead, we all made the same dollar donation, but coordinated that donation through the local church. Then you have a local Christian congregation giving $20,000 to a local charity.

Ultimately then, God is most glorified in our giving when we give together in a coordinated manner.

Now, replicate this experience by, say, ten charities. The Cancer Society. The local hospital. The neighbourhood school. The Women’s shelter. The orphanage. The inner city community center. The relief efforts in Haiti. Support for missionaries in Nicaragua. The local food bank. A local scholarship fund. Just examples. Each getting $10,000-30,000 donations by a group of people who profess to be following the way of their Master, Jesus Christ.

If this sounds too radical, we need to remember that this was normal protocol for Christians and their congregations less than a Century ago. It was once a normal thing for a congregation to build a hospital. It was once an expected thing for a congregation to found a school. There was a time when governments depended upon the Church to care for the poor and the most vulnerable. And we were good at it! No other non-government organization on earth has built more schools, hospitals, shelters, or orphanages than the Church.

We’re building less and less these days. I think it is because we have split up. We’re each doing our own thing.

The community around us looks to the Church and wants to know what contribution we are willing to make. We can do so much more if we do it together.

This past week I had the privilege of delivering food packages (supplied by the people of the Kirk) to impoverished homes in Bain & Grant’s Town, in downtown Nassau. I was accompanied and directed by staff from the local Urban Renewal Center. Neighbourhood children got word of our food supply and literally chased down our vehicle until we stopped and handed each of them some fresh fruit.

The word is getting out. The people of the Kirk care. We care a lot.

I am convinced that the best way to further that perception is by serving together. Accordingly, may I boldly suggest that we arrest this practice of giving to charity as individual Christians. Instead, let’s take the time to coordinate our efforts, and to combine our generosity, with a view to maximizing our capacity to glorify Jesus Christ.

This is an outstanding video. St. Andrew’s Kirk does not yet have video projection capabilities, but the minute we do, expect to see this one on a Sunday morning…perhaps on a few Sunday mornings.

As God commands His children to obey Him, so He conveys power and ability to enable them to do what He commands. — Christopher Love