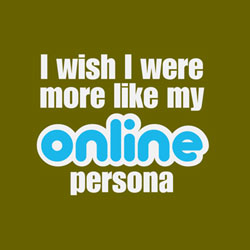 Persona. The role that one assumes or displays in public or society; one’s public image or personality, as distinguished from the inner self.

To varying degrees, every person I have ever met conveys a persona. Social networks serve to magnify this reality. We present ourselves to others, not falsely, but selectively. Our persona is not usually marked by adding things which aren’t there, but by omitting things which are there.

Example: My wife snaps a bunch of photos during our family outing and is about to post them on facebook. I notice a pic of me with my mouth full of food–I look awful, and so I plead with my wife to leave the picture out. Perhaps there is another pic where I look a bit grumpy; I ask her to leave that one out too. Why? Because I don’t want to present myself to others as a grumpy guy who eats too much–that’s not the persona I want to convey.

The same goes for our Twitter/Facebook status.  I could write: “Today was miserable. Conflict at work. Confusion at home.” But I don’t. I’m not comfortable conveying a negative persona. Instead I write something much more benign like, “Don’t rub your eyes after eating hot chicken wings. Looking forward to hockey playoffs.“

I think we all get that the persona we present to the world online is a bit sanitized. It’s the unwritten rule of tweeting, facebooking, and blogging to leave some of the ugly stuff out. If we’re experiencing a personal meltdown, that’s not something we’re going to share with our online community. As a result, what we’re left presenting is our online persona.

For those of us who are pastors, we tend to create a similar persona for the congregations we serve. We don’t tweet about the blow up at the annual general meeting. Nor do we post about record lows in Sunday attendance. We’re not going to blog about the conflict within the Board of Managers. Why? Because we’re dishonest? No. Because we have a certain persona we want to convey. We have an image in mind of what we want our congregation to look like, and we want to keep that in tact.

What got me thinking about this was a post from a well respected pastor, Perry Noble. Perry, like many of us, utilizes Twitter to keep people informed about what is going on in his congregation. Perry strikes me as a very upbeat, energetic, and positive guy–things I aspire to! But I gather that some of his 33,000+ Twitter followers were growing weary of hearing about all of the “epic” things going on where Perry pastors. In reply, Perry posted on his blog today, “I’m Sorry Your Church Is So Normal” (I’ll let you read it for yourself).

It’s possible that some of these critical Twitter followers are simply colleagues who are jealous of the amazing growth and progress that Perry is experiencing within his congregation. But it’s also possible, that some of the criticism of Perry is a genuine appeal for a less sanitized persona. Perhaps, the criticism comes from individuals who feel that they are only receiving half of the story.

I am taking the possibility of the latter to heart. I’m not sure that any of us are capable of altogether dropping our online persona, but I do think we might be able to offer a more balanced one.

I do experience personal and professional challenges. And while it is not always appropriate or helpful to share those challenges online, I am mindful that only reporting the “wins” isn’t appropriate either.

I have some work to do on this. I want to close the gap.

I went wading through Proverbs today looking for some help and inspiration. You won’t find the word “authentic” in the Book of Proverbs, but honesty is a steady theme there. My favourite find? Proverbs 24:26: “An honest answer is like a kiss on the lips.”

One thought on “Your Online Persona”