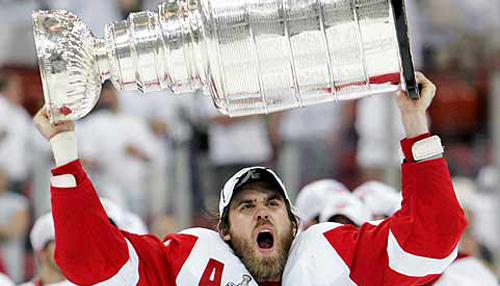 It’s not a huge surprise that the Detroit Red Wings won the Stanley Cup last night. I am amazed, however, at what they endured to claim the Cup. I’m thinking in particular of their Game 5 loss to the Pittsburgh Penguins. The Wings had dominated the play after rebounding from a 2-0, 1st period, deficit. They were up 3-2 late in the game and, to most, seemed destined to claim the Stanley Cup in 5 games. Instead, Maxime Talbot shocked Motown by scoring with 34 seconds left in the 3rd period. The shock was complete when Petr Sykora of the Penguins scored the winning goal in triple overtime.

But here’s what got me thinking about the emotional state of the Red Wings players. When a team is about to win the Stanley Cup a whole bunch of things begin to happen behind the scenes. Late in Game 5 a CBC camera detected the Cup being taken out of its casing to be prepared for on-ice presentation. At the same time there would have been a crew wheeling cases of champagne into the Red Wings dressing room. Another crew would have been installing plastic sheets in the dressing room to protect against spraying bubbly. And still another crew would have been bringing in Stanley Cup t-shirts and hats for the victors. These things would have been ready and in place with a minute remaining in Game 5. But then the Penguins tied the game with 34 seconds left. I can only imagine what the scene was like 34 seconds later…Red Wings players returning to their locker room. They would have seen all this stuff quickly trucked out…the champagne, the shirts, the hats. They would have witnessed a crew hastily tearing down plastic sheets. It would have been dejection poured onto dejection.

But now, we see how the story ended. The Red Wings picked themselves off the floor, took the play to the Penguins in Game 6, and won the Stanley Cup. How did they do it? What helped them to emotionally recover? How did they renew their strength? We can only speculate. Intense mental preparation. Good coaching. Strong inner resolve. Positive communication between teammates. I suspect that all of those things positioned the Red Wings to overcome the adversity that resulted from their Game 5 loss.

It is probably safe to say that the readers of this blog will never compete for the Stanley Cup, but it is likely that we all know what it is like to be floored emotionally. We all likely know the feeling of utter dejection and total frustration. When you find yourself in the day of trial, how do you cope? Do you rely on a strong inner resolve? Do you rely on the counsel of others to coach you through? Do you draw from the well of your previous experiences?

These things were enough to help one hockey team beat another hockey team. I, too, have been helped by wise counsel, positive communication, and unyielding determination. But I have also found that there are trials in life that require much more than a strong will and a good set of friends. As a Christian I have learned that enduring strength and contentment is a gift from God procured through earnest prayer.

If you find yourself in a deep, dark place, laid low by painful circumstances, only God will do. King David, commander of the Israelite army, understood the temptation to trust in human resources amid tribulation, and this is what he writes in Psalm 20: “Some trust in chariots, and some in horses; but we will remember the name of the Lord our God. They have bowed down and fallen; but we have risen and stand upright.” (Psalm 20:7,8).

I have found this to be entirely true in my own life. It’s not that I ignore the human/material resources; they are helpful and often necessary. But, like David, I am learning not to depend on them. I need something bigger than my inner resolve to get me through difficult days. I need something bigger than my education and my life experiences to stand firm through life’s fiercest storms.

A couple Psalms previous, David also writes, “With God’s help I can advance against a troop; with my God I can leap over a wall” (Psalm 18:29). The normal course of life presents walls for each of us to climb over. Some of us are still climbing. Some of us have suffered from repeated falls and are now wondering if the wall can be even scaled.

The Bible says yes. When we trust “in the name of the Lord” we will prevail. Hardship will come. Being a Christian provides no exemption from suffering. However, the Christian who suffers needs to know that sufficient Help is nearby. “With my God I can leap over (life’s) walls” (see also Philippians 4:13).

We may get knocked down, but by God’s grace we’ll get back up again. And when we do, we’ll find our strength renewed and our faith in Christ refreshed.

One thought on “Renewing Your Strength”