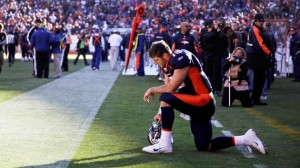 Tim Tebow has been referred to as the most polarizing individual in the NFL. Fans seem to either adore him or loathe him.

On the field, Tebow is a proven winner. In 2007, he won the Heisman Trophy as a sophmore. In 2008, Tebow led the Florida Gators to their 2nd National Championship in 3 years. As I write this, Tebow is 7-1 as a starter for the Denver Broncos (who began the season 1-4). Of those 7 wins, 6 were 4th quarter comebacks (unprecedented). Not surprising that “Tebow-mania” is running wild.

When he’s not eluding tacklers or throwing to receivers, Tebow is promoting his faith in Jesus Christ. For some people, this is a turn-off. Critics ask rhetorically whether God actually cares who wins a football game. Others chirp, suggesting that if God was with Tebow, “He would throw a tighter spiral”. Some television analysts (former NFL QBs) have implored Tebow to “tone it down”. Even Kurt Warner (fellow Christian, and former NFL QB) has suggested that Tebow do less talking, with regard to his relationship with Christ.

I happen to be among those who hugely respect Tim Tebow and the way he carries himself on, and off, the field. It’s not just because he’s a Christian (and a pastor’s son)–there are Christians on every NFL team. Tebow is different. He’s special. And here are the 5 main reasons I love to cheer for Tim Tebow:

You could argue that toughness comes easily when you are 6’3 and 250 lbs. Tebow is no Doug Flutie. And yet, in a league filled with QBs of similar physical proportions, none take on tacklers the way Tebow does. In his junior year of high school football, Tebow suffered an injury to his right leg late in the first half of a game. Originally thought by the coaching staff to be a bad cramp, Tebow played the entire second half with a broken fibula, at one point rushing for a 29-yard touchdown.

Tebow has this attribute on and off the field. On the field, the clearest demonstration of Tebow’s sticktoitiveness are his six 4th quarter comebacks. Sure, there were some long field goals and big defensive stands, but Tebow was the engineer of those comebacks and is undisputed leader of his team. Off the field, Tebow has been equally passionate and persistent in his promotion of Jesus Christ. Critics plead for his silence. Reporters attempt to draw him away from talking about God. Peers exhort him to “just play football”. But Tebow is undeterred. By every appearance, talking about Jesus Christ is the natural overflow of Tebow’s love for Christ. In the face of great pressure to stop talking about Jesus, Tim Tebow keeps talking about Jesus.

Tebow rarely misses an opportunity to promote Jesus Christ. In his college playing days, Tebow even wore Bible verses on his eye paint. In 2010, a new rule for the next NCAA football season, dubbed “The Tebow Rule” by media, banned messages on eye paint. In the 2009 BCS Championship Game, Tebow wore John 3:16 on his eye paint, and as a result, 92 million people searched “John 3:16” on Google during or shortly after the game. When Tebow switched to another verse, there were 3.43 million searches of “Tim Tebow” and “Proverbs 3:5-6” together. On the sidelines, Tebow is so often seen praying that the action is now widely known as ‘Tebowing’. The technical definition for Tebowing is “to get down on a knee and start praying, even if everyone else around you is doing something completely different.”

Not too many 24 year-old athletes have set up foundations designed to help impoverished people. The Tim Tebow Foundation is the outgrowth of an initiative from his college days, “First and 15”. Tebow’s foundation has raised funds for Uncle Dick’s Orphanage in the Phillipines, Shands Hospital (Pediatric Cancer Center) in Gainesville, FL, and the foundation is currently raising funds to build a children’s hospital in the Philippines. Tim Tebow is serious about helping others.

We’re familiar with the saying, “If you’re going to talk the talk, you had better be prepared to walk the walk.” Tim Tebow talks about Christ, but more importantly, Tim Tebow lives in a manner consistent with the ways of Christ. While critics continue to dissect the technical aspects of Tebow’s passing game, none have been able to find fault or failure with Tebow’s lifestyle choices. No, Tim Tebow, is not perfect—we all get that. But there is a consistency to his message and manner which I find winsome and inspiring.

After writing this post on Dec. 15, the Broncos lost 3 in a row and backed into the playoffs at 8-8. Tebow struggled massively in those three games. Today, Tebow and the Broncos shocked the football world and the Pittsburgh Steelers with a 29-23 win in OT. It was Tebow’s best ever professional game.

When asked for his immediate reaction to the game winning touchdown, Tebow responded, “When I saw him scoring, first of all, I just thought, ‘Thank you, Lord.’ Then, I was running pretty fast, chasing him — Like I can catch up to D.T! Then I just jumped into the stands, first time I’ve done that. That was fun. Then, got on a knee and thanked the Lord again and tried to celebrate with my teammates and the fans.”

My copy of Tebow’s book, “Through My Eyes”, arrived in Nassau on Friday. I look forward to that read and posting a review in the coming weeks.

4 thoughts on “5 Reasons I Cheer For Tim Tebow”