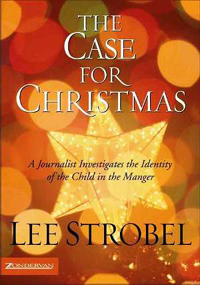 Generosity is an attractive thing. I’ve had the privilege of meeting and befriending many generous people over the course of my life. These people, by their eagerness to provide for others, inspire me.

One of my hopes and prayers for The Well is that we would be marked by persistent generosity. I want those who attend on Sunday morning to always feel like they are getting something from us—inspiration from the music, encouragement from our hospitality, practical instruction from the message and, this Sunday, a free book.

I recently read Lee Strobel’s book, ‘The Case for Christmas’ and thoroughly enjoyed it. The Well has purchased numerous copies and began giving them away last Sunday, at our 11:15 service. We still have plenty leftover, and we’d be delighted to give you a copy this Sunday, December 21.

In this resource you’ll find 91 pages of thoughtful reflection on the origin and present-day relevance of the Christmas story. In his usual journalistic style, Strobel examines the eyewitness evidence (Can the biographies of Jesus be trusted?) and the scientific evidence (Does archaeology confirm or contradict Jesus’ biographies?).

For Strobel, the evidence leads him to a verdict:

Jesus wasn’t born into this world merely to identify with us, console us, or even lead us. His assignment from the outset…was to die for us…with the result being, as the old Christmas carol ‘Hark! The Herald Angels’ says, ‘God and sinners reconciled.’

The Well is only 16 weeks old (This is our first Christmas!). Something special is emerging in this new community. We’d love for you to be a part of that. I hope to see you on Sunday!

As a relatively new Christian, I first became aware of my hypocrisy during my high school years. My roommate at boarding school was Jewish. We spent a lot of time together, and so he had many opportunities to observe me in a variety of settings. One day he shared with me a summary his findings, ‘You’re a fair weather Christian’, he told me. ‘You act like a Christian when it suits you.’

In short, my roommate’s judgment was that his Christian roommate often acted in very unChristian ways. I can only pray that my friend has since had encounters with other Christians who would represent Jesus better than I did.

My roommate’s assessment of me was accurate and fair. I was a fair weather Christian. There was a huge disconnect between what I said and what I did. And the reason I can admit to this embarrassing exchange is because it radically altered the course of my life. My own hypocrisy disgusted me (it still does), and I became determined to lead a life more consistent with the faith I professed. While I do realize that some measure of hypocrisy will always be a part of who I am, I have also learned that I can make progress in the fight against these inconsistencies in my life.

Apparently, I’m not alone in this struggle. David Kinnaman, following years of extensive research, has written a book describing what those outside of Christianity think about Christians. He summarized his findings in the one word title of his book: unChristian. The world outside of Christianity doesn’t regard those on the inside to be representing Jesus very well.

That bugs me. (Yet, I realize that, to some degree, I’m still part of the problem.)

Matthew 15:1-20 describes a confrontation between Jesus and the religious leaders of His day. The Pharisees were bothered that Jesus wasn’t ensuring that His disciples were engaged in all of the ceremonial washings. Jesus responds with a rebuke. He calls them ‘hypocrites’ (Matthew 15:7-9) and suggests that they are doing a dreadful job in representing the faith they profess.

My temptation is to sometimes imagine myself in that scene, aligned with Jesus in His rebuke. But, when I think more deeply about this scene I discover that some of the attitudes which plagued the Pharisees also plague me.

This past Sunday I delivered a message about hypocrisy, outlining the marks of the hypocrite (according to Matthew 15:1-20), while offering a suitable remedy. Again, I don’t think that hypocrisy can be entirely eliminated on this side of heaven; nonetheless, I am convinced that our efforts to stem hypocrisy are hugely important.

Hypocrisy is a big deal. It negatively shapes the perceptions that others have about Christians. Hypocrisy reflects poorly on our Lord. Moreover, it dishonours Him.

If you’re looking for an antidote for hypocrisy, I encourage you to listen to the audio message below.

I also commend the following short video, produced by Desiring God Ministries. The video is admittedly a bit slow moving, but is a powerful tool for highlighting this ancient problem of  hypocrisy.

As always, your comments are appreciated! 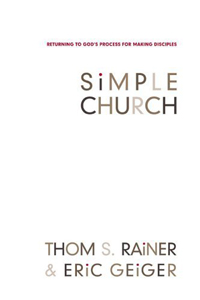 As usual, I get the sense that I’m a few steps behind my colleagues. That’s ok, as the youngest of three children, I learned a lot and avoided many mistakes by being last. I just finished reading ‘Simple Church’, commended by Jeff Loach in his blog, Passionately His. I also detected that the principles found in this book are often expounded in the blog of another friend/colleague, Carey Nieuwhof. Being the 3rd among friends to weigh in here, I’ll be brief in order to avoid redundancy.

First let me offer a qualifier for my friends who like to ‘sink their teeth’ into reformed theology…This is no theological treatise. Not enough close.

Let me offer an analogy, which I hope will highlight the value of this book. Think of the church as a house. The church, like a house, needs a firm foundation. This, of course, is Jesus Christ. On this foundation are other materials: walls, floors, ceilings, windows, etc. If you’re looking for a book to help you build appropriate structures, I would recommend something like Mark Dever’s, Nine Marks of a Healthy Church.

Dever’s book, along with John MacArthur’s, The Master’s Plan for the Church, tend to do a great job in helping us to build on the right foundation and they provide excellent guidance for selecting the best materials with which to build. However, what is often lacking in such books is a description of a helpful layout. How many walls? How many rooms? How far apart should the windows be?, and so on. What often results is that we have a firm structure, built with all the right materials, but due to lack of attention to layout, we have difficulty navigating within the structure.

Simple Church has a word for this poor layout: Complexity.

The thesis of this book is that complexity hinders the spiritual progress, vitality, and growth of the local church. Simplicity, on the other hand, promotes all of these things. Therefore, local congregations would do well to engage in an Extreme Makeover: Church Edition. Congregations should take steps to eliminate complexity, based on the principle that less is more.

I realize that such a principle is counterintuitive. The authors also recognize this and offer this response based upon their research:

In highlighting the value of Simple Church and the emphasis on “layout”, I wouldn’t want anyone to think that I am placing substance on the periphery. A house with an appealing, sensible, layout is not desirable if it is built on sinking sand with defective materials. Nevertheless, I am grateful for a book like Simple Church, which warns me to resist complexity at every turn.

My experience confirms the thesis of the authors on the complexity side. I hope to be able to say the same as I lead the people entrusted to my care towards a more simple way of being the church in this world.

For the last couple of months I have put off reading a book by Voddie Baucham Jr. I sometimes do this when I suspect that a) the book will bore me, or b) the book will hugely convict me and challenge my current habits.

I had put Baucham’s book, ‘Family Driven Faith’ in the latter category. Whatever weight the book relieved me of as a pastor was counter balanced by the responsibility he placed on me as a husband and father. The book begins with what I would regard as an accurate diagnosis of our current predicament:

Ouch!!! Voddie Baucham’s assertions are carefully measured and entirely drawn from the pages of Scripture. When Baucham makes an observation from experience, he is careful to note that in distinction to what the Bible requires.

One of my favourite sections in the book is where Baucham distinguishes between shaping our children’s worldview and giving them rules. It’s not enough to say ‘We don’t do this’ or ‘We don’t do that because we are Christians’–or even ‘because the Bible says so.’ We need to do more than parrot the commands of Scripture; we need to explain them. By explaining why the commands of Scripture exist, by reasoning them with our children, we shape their worldview and we help them to think biblically. This is critical because, as Baucham notes:

(my children) will do what I tell them as long as I am around. But once they leave home, they will live in accordance with their worldview, not my rules. Thus I must spend as much time shaping and molding their thinking.

In other words, rules do little more than temporarily fence our children in.  If, however, we shift our priority to shaping our children’s worldview, we will find that their desire to go beyond the limits of the ‘fence’ will be greatly diminished.

I commend this book to every husband, wife, parent and church leader. This book will do more than shape your viewpoint, it will inspire a tangible response. This book exposed a lot of my shortcomings as a husband and father, and that’s ok….I want to be better. This book is a huge help. Thanks Voddie.

Desiring God Ministries (John Piper) have recently released the following trailer (below) to promote their small group ministry resources. I have read all but one of the books related to the respective curriculums and would highly recommend them for a gathering of serious Christians. But here’s my question: What would be the best dvd/book/study guide curriculum for someone who is very new to Christianity or very new to small group ministries? In my limited survey of available resources, there appears to be a gap between ALPHA (not a fan BTW) on the one hand, and these solid, discipleship-focused, resources on the other hand. Maybe I’m creating a false dichotomy here, but it does appear that even the Scriptures distinguish between two types of followers in terms of what, and how, they are instructed (Hebrews 5:11-14).

Any suggestions for me?

Check out the trailer.

The truth is that more spiritual progress is made through failure and tears than success and laughter. — Alistair Begg