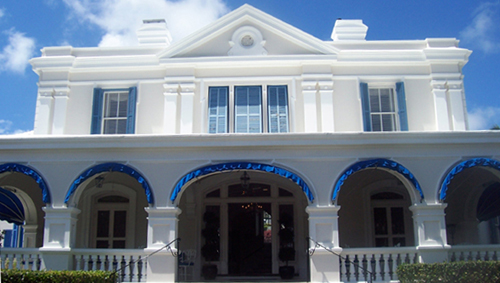 The pic you’re looking at is the Rosedon Hotel, in Hamilton Bermuda. It is a gorgeous Victorian style facility with dignified historical roots. When you enter the Rosedon it immediately feels like you’ve entered a time warp sending you into the early part of the 20th Century.

I’m amazed at how well the Rosedon has preserved, not only their original look, but also their traditional customs. ‘Afternoon Tea’ is offered each day, gathering together many of the hotel guests in the front porch (pictured above). One of the customs they have preserved I had never even heard of—just off the main lobby is an ‘honour bar.’ Someone seeking a pop, beer, wine, or something stronger, simply helps themselves and then scribbles a note with their name and room number. The Rosedon also has a classically decorated library/reading room with furnishings and books much older than I.

The Rosedon is a traditional style hotel and, by the looks and sound of things, is hugely popular. Reflecting upon this, I ask, ‘Can a church offer a traditional style and still be popular?’ (popular is not my preferred word to talk about the church, but I couldn’t think of a suitable alternative!)

I think the answer is ‘Yes’. At St. Giles Kingsway our traditional Sunday morning service is reasonably well attended (200+) and enthusiastically received by those who regularly worship with us. I’m curious, however, if traditionally styled services could help themselves by sensibly integrating that which is not traditional. Again, I think of the Rosedon Hotel. When the hotel first opened, they did not have air conditioning (actually, they didn’t even use electricity for the first few years!). Now, every room is air conditioned. The main lobby looks entirely 1920 with the exception of the flat screen computer monitor, which uses touch screen technology to provide guests with information about the hotel and attractions in Bermuda. Every room has wireless internet access (making this blog post possible!) and satellite TV. The Rosedon is thoroughly traditional, but it has also wisely integrated some contemporary conveniences.

I worry that some congregations commit to the former, while resisting the latter. I regard this to be a mistake. Traditional formats which include contemporary elements is what I would describe as being ‘Appropriately Traditional.’ My conviction is that 21st Century congregations can succeed with a traditional format if they are discerning enough to know how to introduce and integrate contemporary elements. Traditional and contemporary need not be regarded as being mutually exclusive. I’m not advocating here what some would call ‘blended worship’; I’m suggesting that traditional/classical style worship can still be the predominant format, but it would be unwise in my opinion to hold rigidly to that. Just as it would have been unwise for the Rosedon to resist air conditioning, wireless internet, and satellite TV.

If you’ve been tracking this blog, you likely already know of our proposed alternative, not at all traditional ministry, The Well. Many congregations, wanting to simplify things and be specialists, choose one format over against another. I get that. But, frankly, I like both styles immensely. Both styles help me engage God meaningfully. And, Lord willing, I’ll have the energy to promote two very different approaches to worship on Sunday morning. One approach to Sunday morning ministry will be largely devoid of traditional accessories. The other approach will be saturated in them, with an aim of becoming more appropriately traditional. Both, I pray, will glorify God and encourage His people.

What do you think?

The video below chronicles what today’s youth are saying about the church. It’s an honest, sometimes hard-hitting, evaluation of how the church is, or isn’t, serving the needs of our young people. Even the host of ‘Misplaced’, Shauna Simmonds, laments over the “low relevance of the Canadian church” and implores the church to put aside the usual fare of programs in favour of creating “God-centred gatherings.” What a great thing to aim for! The vantage point this video offers is immensely helpful in facilitating an understanding of how the church can help, rather than hinder, the next generation. Produced by Make You Think. Run time = 15min 38sec.

How does this strike you?

Attend your local church on a Sunday morning and there is a good chance you’ll hear the terms ‘grace’ and ‘mercy’. Seldom, however, are these terms explained. We glean from the context in which they are used that grace and mercy are things we want. We’re also told that these things come from God. What we don’t often hear is, ‘On what basis do we receive grace and mercy? And having received grace and mercy, how are we to respond?’

The last few weeks I have been teaching from the Book of James. This morning, our text was James 2:1-13. The main exhortation in this passage is against showing partiality. Specifically, James says, “don’t show favouritism” (James 2:1). My temptation, as a communicator, was to immediately jump into descriptions of what favouritism is and to talk about how we can avoid it. The danger with that approach, however, is I run the risk of reducing my sermon to mere moralistic teaching. Because Christianity isn’t a bunch of dos and don’ts, I need to make sure my teaching is not tantamount to naming dos and don’ts.

Mindful of this, I asked myself the question, ‘Why does God want me to not show favouritism? Could it have something to do with the manner in which He engages me?’

That’s where grace and mercy come in. Once we understand what it means for God to deal graciously and mercifully with us, we’re better positioned to apply exhortations like “don’t show favouritism.”

Have a listen. I’d be delighted to hear what you think.

Alternatively, you can read my sermon notes here. Or, read along while listening. 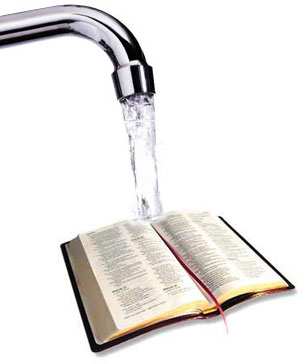 I received some great comments to my recent post ‘Watering Down The Word?‘ and figured a follow-up post was warranted (might be helpful). Those familiar with my ministry know that I don’t have it in me to preach anything less than the Bible (2 Timothy 4:2). I don’t have it in me to preach anything less than Jesus Christ, and Him crucified (1 Corinthians 2:2). I’m also mindful of how my choice of words (vocabulary) hugely affects how my message is heard. I’m convinced that a communicator’s manner of delivery has the ability to attract or repel the hearer. Yes, God is sovereign. I rely on this! I will not, however, use God’s sovereignty as an excuse to preach without any thought of form and manner of delivery. I see value in being attentive to the mindset of those I’m speaking to. I see value in anticipating their objections and questions. I see value in in speaking sensitively and sensibly to them. Having done that, I leave it to God to soften hearts and to seal the message that Jesus is LORD.

I commend to the readers of this blog the following video from Desiring God Ministries. Thank-you Cliff Cline for locating this for me. Our new ministry, The Well, may not use a traditional pulpit, but John Piper’s message, ‘Don’t Waste Your Pulpit’ still applies. Keep those comments coming!

What does it mean to be blessed? What does a blessed life look like? Ask around I’m sure you’ll get a variety of answers. And yet, as I read the New Testament, what constitutes a blessed state is presented in a way that is neither vague nor ambiguous. The way of blessing is, both, clearly described and highly accessible. In other words, a life of blessing is not something reserved for the ‘religious elite’ who successfully navigate a complicated formula of ‘dos and don’ts’. To the contrary, a life of blessing is intended as the normal course for followers of Christ.

Central to getting us on this course, and keeping us on course, is the Word of God. To this end, the Book of James exhorts us to receive and apply the Word in a particular way. John Piper, commenting on text from James, provides a helpful analogy likening our receiving of the Word to receiving oxygen.

I found this analogy to be extremely helpful as I spoke on James 1:19-25 this past Sunday. I, like Piper, am convinced that receiving the Word is like breathing. Without a regular intake of Scripture, we set ourselves up to suffocate spiritually. And, in the process, we choke out the blessings that God intends for us.

I certainly don’t want to experience that! And yet, I have so much room for improvement here. In so many ways I feel that when it comes to appropriately receiving God’s Word, I’m still learning to breathe.

Blessing need not be some abstract concept. Blessing can be your daily reality. Have a listen. I’d be delighted to hear what you think.