Celebrating an anniversary will often cause us to reflect deeply. Allie and I have just returned from a vacation, which we had planned as a celebration of our 15th wedding anniversary (an early celebration—our actual anniversary is May 7). To some, fifteen years might not seem very long. A few years back, I attended the 65th wedding anniversary of a couple within our congregation. A few couples at St. Giles Kingsway have celebrated 60 years of marriage, and a few more have celebrated 50 years of marriage. I marvel at those numbers, recognizing the mutual investment that is required to keep a marriage strong.

After 15 years of marriage, I hardly consider myself an expert—particularly since I am the type of person who learns things the hard way. Most everything I do know about what makes for a good marriage I’ve learned from my missteps and my mistakes. One of the things I have noticed, interestingly, is that many of the ingredients required to keep a marriage strong are needed to keep our relationship with God strong. Below are a few things I noted from this past week away, and the corresponding principles which will help our relationship with our spouse and with our Lord:

Corresponding principle: Our relationship with our spouse, and our Lord, may be deeply personal but it is nonetheless important to welcome the help of friends to support these relationships (see Prov. 27:17). 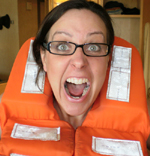 Event: We participate in the safety drill on Celebrity Century.

Corresponding principle: Don’t pretend as if bad things can’t happen. Have a game-plan to keep the relationship strong when challenges come (see James 4:7,8).

Event: We visit the Key Lime pie factory in Key West first thing in the morning and eat a slice of pie.

Corresponding Principle: Routine is good, but don’t be afraid to step outside of the box. Don’t place unnecessary limits on the relationship (see Eph. 3:20). 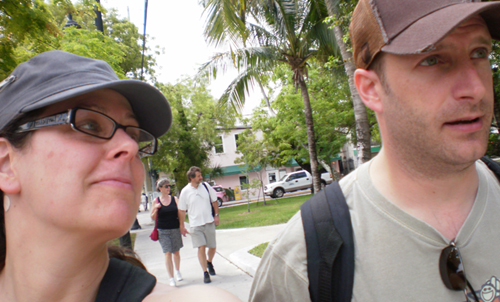 Event: Allie wants to walk a great distance (in scorching heat) to Hemingway’s house. This holds zero interest for me. We still go.

Corresponding principle: It’s not always about what I want. Relationships thrive when I don’t insist on my way (see Rom. 12:10).

Event: Allie and I attend a comedy show.

Corresponding principle: Laughing together is healthy and helpful for relationships.

Event: Allie and I spend virtually every moment of 7 days together (this NEVER happens).

Corresponding principle: Quality time together is essential for a relationship to thrive (see John 15:4, 5).

This past week has not only refreshed my marriage relationship, but it has reminded me of the priority of my relationship with Jesus. I don’t want to ever take my relationship with Him for granted. More than anything else on this earth, I want THAT relationship to thrive. And I pray that each of you reading this will experience the blessing that comes from abiding closely to Jesus.

I’m just back from a week of holidays and a two-week hiatus from blogging (please forgive me). Let me ease back into the latter by encouraging you to view the video below, produced by a church I hugely respect: Connexus. The video is based on ‘Orange’ principles and, if you want to know more about what that means you will want to read a blog post from one of the all-stars at The Well, Diana Loach (who is currently on her way to the Orange Conference in Atlanta, GA). And thanks to Cliff Cline (all-star musician at The Well) for directing me to this online promo.

In 11 years as a pastor, I have officiated at over 100 funerals. I have conducted a funeral for an infant, for a teenager, for friends, and for family members. I feel well-acquainted with death, and yet in no sense am I used to it. Death never fails to upset and bother me. I admit this knowing that death bothered and upset Jesus. Even after declaring to Martha, “I am the Resurrection and the life” (John 11:25), Jesus nonetheless wept at the tomb of Lazarus (John 11:35). Yes, not even the assurance of raising Lazarus back to life was enough to prevent Jesus from grieving.

Death is an intrusion. It was not a part of humanity’s original context. In this sense, it does not belong. The Bible tells us that death was only introduced as a direct consequence to Adam and Eve’s sin. In other words, human beings were not originally designed to die, but to live, and to enjoy unfettered communion with God.

But God, not wanting death and sin to get the last word, sent His Son into this world. On Good Friday, when the Son of God was nailed to a cross, death was dealt a death blow. The great enemy of death has been overcome. This is why the apostle Paul can remind us that we do not grieve as others do (1Thess. 4:13). Our grief is permeated with hope and lined with the assurance of victory.

I realize that is more easily said from a pulpit than it is from a hospital bed. Recognizing this, when I delivered the message “The Death Blow To Death” this past Good Friday, I referenced my friend Rachel Barkey. Rachel is an encouragement to all who wonder what faith ought to look like in the face of suffering.  (I recently blogged about Rachel’s message to nearly 600 women on March 4 of this year). Rachel is a young mother of two who is bravely living with cancer while boldly testifying to the goodness of God. Rachel’s perspective on death and her faith in Jesus Christ is nothing short of inspirational.

I hope the message below is an encouragement to all who struggle to cope with the intrusion of death.

When Jesus uttered the words “It is finished” (John 19:30), He meant it. Death has been overcome.

My 6 year-old daughter saw the heading on my notes, ‘Who Is Jesus?’, and exclaimed, ‘Papa, that’s an easy one! Jesus is God.’

After commending my daughter on her answer, I had to remind her that many do not regard Jesus to be God. At The Well, we showed of video of people being asked and answering the question, ‘Who is/was Jesus?’

The answers were not surprising. They were varied:

“Someone with a lot of great ideas.”

It seems to me that before we consider the question for ourselves, it would be helpful to ask a different question. Who did Jesus think He was? Once we have a handle on how Jesus viewed Himself, we’ll be better positioned to frame our own answer.

These claims limit the number of possible (logical) answers to the question, ‘Who Is Jesus?’ Few have summarized the parameters for discussion better than C.S. Lewis (author of the Chronicles of Narnia and Mere Christianity). Taking our cue from what Jesus said about Himself, the options for identifying Jesus are LIAR, LUNATIC or LORD.

I am trying here to prevent anyone saying the really foolish thing that people often say about Him: ‘I’m ready to accept Jesus as a great moral teacher, but I don’t accept His claim to be God.’ That is the one thing we must not say. A man who was merely a man and said the sort of things Jesus said would not be a great moral teacher. He would either be a lunatic — on the level with the man who says he is a poached egg — or else he would be the Devil of Hell. You must make your choice. Either this man was, and is, the Son of God: or else a madman or something worse. You can shut Him up for a fool, you can spit at Him and kill Him as a demon; or you can fall at His feet and call Him Lord and God. But let us not come with any patronizing nonsense about His being a great human teacher. He has not left that open to us. He did not intend to. (Mere Christianity, p40, 41).

The question, ‘Who Is Jesus?’ was being asked nearly 2,000 years ago when Jesus entered Jerusalem on a donkey, while being welcomed by a cheering multitude. The question is still being asked today. I get that we come to this question at differing times, in differing circumstances, with differing biases. My chief concern is only that we come to the question. My hope is that we will ask our own questions, investigate the claims, and draw our conclusions.

I certainly didn’t receive all the answers I was looking for overnight. It has been a long process of discovery for me. I’m still learning; I’m still trying to sharpen my understanding of who God is and how I am to relate to Him. And yet, I am so thankful for how C.S. Lewis has framed the question with the categories of LIAR, LUNATIC, LORD……because that has helped me to confidently profess that Jesus is LORD.

On Sunday, April 5, we took up the question ‘Who Is Jesus?’ while looking through the lense of Matthew 21:1-17. I’d like to think that listening to the message below will assist in your journey in getting to know Jesus and connecting to Him.

Pursuing humility is counter-cultural. When seeking employment, we’ve been directed to build resumes that highlight our greatest strengths. When vying for a promotion, it is not uncommon to see a highly competitive environment emerge in the workplace where ‘one-up-manship’ becomes the preferred method for climbing the corporate ladder. When trying out for a sports team it is necessary for the athlete to demonstrate his or her superiority over the other prospects. In a society where ‘appearance is everything’, we’ve been conditioned to always present well.

The follower of Jesus, however, has been directed differently. We’ve been called to pursue humility. The word literally means, ‘to make oneself low’. In answering His disciples question about greatness (Mark 9:33, 34), Jesus points to humility as an essential characteristic,

Whoever humbles himself like this child is the greatest in the kingdom of heaven. (Matthew 18:3, 4)

Children are humble in the sense that they readily accept their status as dependents. Children have an acute sense of their need for parental oversight. There is a kind of yielding that young children are extremely good at.

What I think Jesus is suggesting with this comparison to young children is that being a Christian is not a do-it-yourself endeavour. That is to say that becoming and growing as a Christian does not come from trusting in our own abilities, but by trusting in another—Christ.

If I could give humility another word it would be teachable. Jesus wants His followers to be teachable. As we approach the Scriptures in private study and in corporate worship, we benefit when we allow the Word to examine and judge us, rather than the other way around.

Being teachable will greatly facilitate our transformation towards Christ-likeness. And being humble will open the gateway to progress with many other key character traits. In short, pursuing humility will help us to GROW.

On Sunday March 29, I delivered a message on this subject at St. Giles Kingsway and The Well. Taking my cue from Jesus’ teaching, I am convinced that pursuing this trait is vital for our spiritual health. What do you think? Have a listen and let me know.

As the bird with a broken wing is “free” to fly but not able, so the natural man is free to come to God but not able. — Loraine Boettner