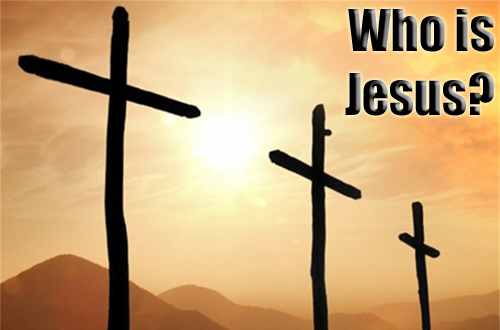 My 6 year-old daughter saw the heading on my notes, ‘Who Is Jesus?’, and exclaimed, ‘Papa, that’s an easy one! Jesus is God.’

After commending my daughter on her answer, I had to remind her that many do not regard Jesus to be God. At The Well, we showed of video of people being asked and answering the question, ‘Who is/was Jesus?’

The answers were not surprising. They were varied:

“Someone with a lot of great ideas.”

It seems to me that before we consider the question for ourselves, it would be helpful to ask a different question. Who did Jesus think He was? Once we have a handle on how Jesus viewed Himself, we’ll be better positioned to frame our own answer.

These claims limit the number of possible (logical) answers to the question, ‘Who Is Jesus?’ Few have summarized the parameters for discussion better than C.S. Lewis (author of the Chronicles of Narnia and Mere Christianity). Taking our cue from what Jesus said about Himself, the options for identifying Jesus are LIAR, LUNATIC or LORD.

I am trying here to prevent anyone saying the really foolish thing that people often say about Him: ‘I’m ready to accept Jesus as a great moral teacher, but I don’t accept His claim to be God.’ That is the one thing we must not say. A man who was merely a man and said the sort of things Jesus said would not be a great moral teacher. He would either be a lunatic — on the level with the man who says he is a poached egg — or else he would be the Devil of Hell. You must make your choice. Either this man was, and is, the Son of God: or else a madman or something worse. You can shut Him up for a fool, you can spit at Him and kill Him as a demon; or you can fall at His feet and call Him Lord and God. But let us not come with any patronizing nonsense about His being a great human teacher. He has not left that open to us. He did not intend to. (Mere Christianity, p40, 41).

The question, ‘Who Is Jesus?’ was being asked nearly 2,000 years ago when Jesus entered Jerusalem on a donkey, while being welcomed by a cheering multitude. The question is still being asked today. I get that we come to this question at differing times, in differing circumstances, with differing biases. My chief concern is only that we come to the question. My hope is that we will ask our own questions, investigate the claims, and draw our conclusions.

I certainly didn’t receive all the answers I was looking for overnight. It has been a long process of discovery for me. I’m still learning; I’m still trying to sharpen my understanding of who God is and how I am to relate to Him. And yet, I am so thankful for how C.S. Lewis has framed the question with the categories of LIAR, LUNATIC, LORD……because that has helped me to confidently profess that Jesus is LORD.

On Sunday, April 5, we took up the question ‘Who Is Jesus?’ while looking through the lense of Matthew 21:1-17. I’d like to think that listening to the message below will assist in your journey in getting to know Jesus and connecting to Him.