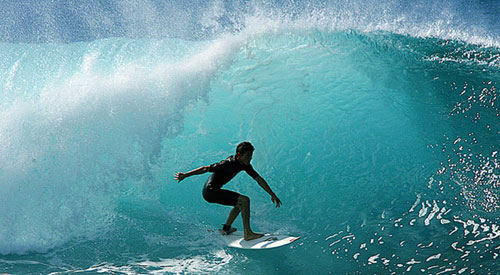 Having just returned from a Caribbean Cruise, I find myself still thinking about ocean waves. When onboard the ship, the waves seemed inconsequential. Our room was on the 8th deck, far removed from the splashing of water. Once in a while, however, I would stumble as the ship tilted slightly, moved by the force of the waves below. This movement is even more pronounced, I learned, when one is running on a treadmill. On one occasion, the movement caused by the waves just about ejected me sideways from the treadmill!

When the ship docked in Cozumel, Mexico, we headed immediately for the beach. The waves were big. As we watched the waves recede from the beach we could see that the undertow was also substantial. I was not deterred. I was the first from among our party to jump in. It wasn’t long before the waves began to hammer me, consistently knocking me off my feet. Even when I tried to stay above the waves, taking in a mouth full of saltwater seemed inevitable.

A few minutes into my ‘swim’ I became aware how far out into the ocean I was. The undertow had been gradually pulling me further and further away from shore. I wish I could have had my friend’s perspective of my predicament. I was somewhat oblivious to the danger of it all from where I was. A few of my friends, concerned about how far I had drifted, came in to join me (or rescue me, I’m not sure which it is!). Once they were assured of my safety, one of my friends began to ‘body surf’. Instead of fighting the waves, my friend took to riding the waves. Watching this, I was reminded that the quickest and most efficient way for a swimmer to travel the ocean is to allow oneself to be carried by the waves.

I began to reflect on this theologically. Recalling something a read a number of years ago, I began thinking of waves as a metaphor for God’s movement: His workings, and His will. Whenever I attempt to stand against God’s work/will, I get battered and knocked off my feet. All of my attempts to dodge God’s movements are unsuccessful. Even if I take a more passive posture, one marked by inactivity, I find that I am pulled away from the stability of shore.

What am I supposed to do? God wants us to ride the wave. God wants us, like a diligent surfer, to be watchful for a suitable wave to transport us.

If you’re at all like me, you’ve stood against the wave and been knocked down. You’ve tried unsuccessfully to dodge the wave. You’ve attempted to ignore the presence of the wave and have drifted to such a degree that you’re left with only one option: Ride the wave home.

You probably don’t need me to inform you that riding the wave of God’s will and power is the best option for our lives. But maybe you, like me, need this reminder from time to time.

What, practically speaking, does riding the wave look like? I agree with Rick Warren, who writes that riding the wave involves changing our prayer from ‘Lord, bless what I’m doing‘ to ‘Lord, help me to do what you are blessing‘ (Warren, The Purpose Driven Church, 15). Too often, I think, our prayers are tantamount to an attempt to build waves. That’s not how the Bible directs us to pray. God alone builds waves. Our task is to recognize a wave that God has designed for us to ride. To borrow the biblical metaphor, our job is not to bust down doors in order to get somewhere. Our task is to pray for God to open doors for us to walk through (Colossians 4:2-6).

God is *sovereign (*i.e. in charge). God opens doors; we walk through. God creates waves; we ride them.

I like that equation. I have neither the ability to create waves, nor do I have the power to stand against them. I need God every step of the way. Moreover, I want to be invested in what God’s doing. Time, energy, and resources are too precious to be given to anything else.

Friend, look for the wave. When you find it, when you discern what God has for you to do, put all that you have into it and ride the wave.

2 thoughts on “Ride The Wave”